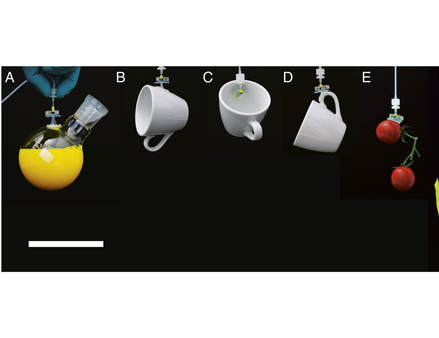 Robots generally need a gripper that adapts to three-dimensional surfaces. Such a gripper needs to be soft to adapt to a great variety of geometries, but not too soft, as it will detach easily and not be able to bear weight for very long. Researchers working with Metin Sitti at the Max Planck Institute for Intelligent Systems in Stuttgart developed a membrane equipped with microscopic fibres inspired by the fine hairs on a gecko's foot and attached it to a suction cup-like flexible body. An internal pressure differential ensures perfect conformation of the flexible gripper to a wide variety of surfaces and equally distributes the load over the entire contact interface. As a result, the researchers suppressed load induced stress concentrations at the edges, which strongly reduced the adhesion. The gripper demonstrates a 14-times higher adhesion than grippers without this load sharing mechanism.

The gecko can easily move along smooth walls or upside down on the ceiling. Owing to the millions of tiny hairs on the underside of its toes. The tiny hairs adhere to almost any surface by means of van der Waals forces. While the force of a single hair is extremely weak, their individual contributions add up to a total force that can carry a multiple of the little lizard's body weight.

Simplified mimics of nature’s adhesives can now be technologically fabricated, for example in polymers, having gecko inspired adhesive hairs on their surface. However, up to now, their rigid backing restricted the adhesive membrane to adapt to curved surfaces. Even a soft backing would be of little use: it would peel off from the contact edges, where the forces concentrate, similar to a piece of Sellotape that is pulled off.

“Our goal therefore was to distribute the load equally over the entire membrane,” explains Sukho Song, first author of the study, from the Max Planck Institute for Intelligent Systems in Stuttgart. The key: The researchers attached an adhesive membrane to a flexible gripper body allowing the membrane to adapt to complex shapes. Then, they applied a gentle pressure differential inside the gripper chamber, causing its adaptation to the object surface. The pressure differential distributes the load across the entire contact interface of the membrane. This prevents the formation of load concentrations at the gripper edges, which can induce an easy releasing of the object. “Another advantage is that the gripper can accommodate the deformation of an object. As a result, the surfaces do not peel off, which would lead to a loss of adhesive force,” says co-author Dirk-Michael Drotlef. This is not possible with a rigid backing.

The scientists in Stuttgart overcame another weakness of previous systems. On the gecko’s foot, millions of tiny hairs adhere far less than a million individual hairs. Because many hairs are not optimally aligned or do not make contact with the surface. This in turn means that the adhesive force does not proportionally increase with the surface area. Up to now, the performance of most reversible technical adhesive systems has been significantly poorer on curved surfaces compared to the gecko. “Up to now, only 1.8 percent of the maximum adhesive force was achieved by similar systems without the new load sharing mechanism,” says Drotlef. “Our gripper achieves a 14 times increase, which is around 26 percent.”

This is very close to the natural model and meets important requirements for real-world gripping applications. In tests, a coin-sized gripper could hold a roughly 300-gram glass flask filled with liquid, a cup at different holding points, including its handle, as well as tomatoes and a 140-gram plastic bag. Therefore, it is truly a multipurpose gripper.

Another advantage is the residue-free adhesion, which is important for the microchip manufacturing where even the smallest contamination has to be avoided. Robots, on the other hand, could move on differently shaped surfaces using this technology, irrespective of how narrow these are. Adhesion to very rough surfaces is the only aspect that continues to cause problems for researchers, but the team in Stuttgart is about to address this issue.