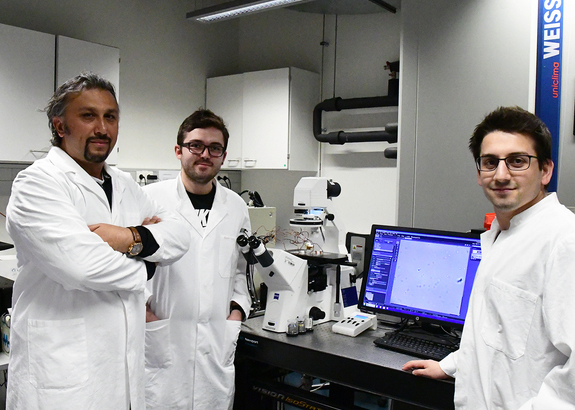 Multifunctional bacterial microswimmer able to deliver cargo and destroy itself

The untethered biohybrid microswimmer is able to transport and deliver cargo encapsulated into a guidable red blood cell, while an attached bacterium, one of the most efficient swimmers in nature, acts as a propeller to move it forward. Once it has reached its destination and delivered its cargo, the scientists can destroy the microswimmer using infrared light.

The untethered biohybrid microswimmer is able to transport and deliver cargo encapsulated into a guidable red blood cell, while an attached bacterium, one of the most efficient swimmers in nature, acts as a propeller to move it forward. Once it has reached its destination and delivered its cargo, the scientists can destroy the microswimmer using infrared light.

Stuttgart Researchers of the Physical Intelligence Department at the Max Planck Institute for Intelligent Systems in Stuttgart have developed a multifunctional microswimmer built out of two parts with very unique properties: they combine a bacterium (green), one of the most efficient swimmers in nature, with a red blood cell (RBC), a natural carrier inside the human body. 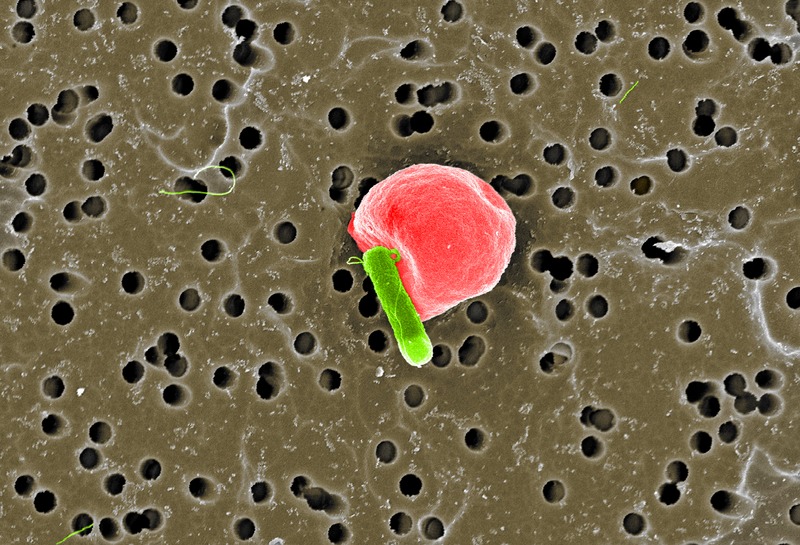 RBCs have extraordinary capabilities: they have high payload efficiency and can easily deform and squeeze through narrow capillaries that are half their sizes. This was the reason why the researchers selected RBCs when they intended to develop a microswimmer that would meet the criteria of high load-bearing capacity and flexibility. Combined with the driving force of bacteria the motor of the microswimmer it is possible for it to transport cargo even through narrow channels or gaps.

The RBC microswimmer squeezes through a 2 µm small gap

The researchers have encapsulated the cargo in the red blood cell: firstly, the cancer drug doxorubicin as well as iron nanoparticles, for the scientists to be able to magnetically control the microswimmer. Once it has reached its destination, for example a cancer cell, the tumour's acidic environment attacks the membrane of the red blood cell, making it brittle, with the result that the cancer drug is released. The charged cancer drugs are delivered to the doorstep of the cancer cell, so to speak. Once this task is fulfilled, the researchers can destroy the microswimmer by heating it with infrared light so that it decomposes. More on this below.

"Three things make this microswimmer stand out compared to others", says Oncay Yasa, who together with Yunus Alapan has been working on building the microswimmer. Their research publication appeared in the Science Robotics Journal on 25th April with the title Soft Erythrocyte-based Bacterial Microswimmers for Cargo Delivery. "First, its deformability is impressive: the microswimmer can squeeze through narrow gaps of only two micrometers, while in itself being around 6 micrometers large."

"Secondly, the link between the bacterium, the motor, and the RBC, the cargo bay, is very strong due to us utilizing a very strong interaction seen in nature", Oncay Yasa adds. "We use the protein Avidin, which acts as a snap hook, linking on one side to Biotin sticking out of the membrane of the bacteria and on the other side linking to antibodies (anti-TER-119) covering the RBC. That way, there is no harsh chemical reaction while binding the bacterium to the red blood cell. Rather, it´s more like a moveable snap hook system, which attaches the two parts with Avidin in the middle. That makes the microswimmer ever more robust and flexible than others."

Avidin connects the bacterium with the red blood cell

"Thirdly", Yunus Alapan continues, "we loaded the RBC with special molecules that can absorb infrared light. When we apply infrared light from outside, the RBC heats up and destroys itself and the attached bacterium. That solves the problem of what to do once the drugs have been delivered. We need the bacterium to be destroyed right away to avoid its uncontrolled proliferation. We don´t want the body defending itself with an immune reaction."

One day, the researchers hope to test their invention inside a digestive system or a stomach, but at this point they have to make due with testing their microswimmers under the microscope. Biohybrid microswimmers offer great potential in future non-invasive medical operations owing to their untethered steerability, high payload, deformation capabilities, and the possibility of destruction what we call a "termination switch", says Oncay Yasa. "The microswimmer we developed demonstrates a unique multi-functionality that has not been observed in other bacterium-driven microswimmers before," Metin Sitti adds, the Director of the Physical Intelligence Department at the Max Planck Institute for Intelligent Systems, who worked with Alapan and Yasa on the study. "The presented RBC microswimmers are a great step forward in using soft biohybrid microswimmers in clinical applications, though there still exist challenges to be overcome such as immune response." "Our RBC microswimmer creates the blueprint for the next generation of multimodal, targeted cargo delivery systems." Alapan concludes.

Professor Dr. Metin Sitti is the Director of the Physical Intelligence Department at the Max Planck Institute for Intelligent Systems, based in Stuttgart.

Sitti received his BSc and MSc degrees in electrical and electronics engineering from Bogazici University in Istanbul in 1992 and 1994, respectively, and his PhD degree in electrical engineering from the University of Tokyo in 1999. He was a research scientist at University of California at Berkeley during 1999 and 2002. During 2002-2016, he was a Professor in the Department of Mechanical Engineering and Robotics Institute at Carnegie Mellon University in Pittsburgh, USA. Since 2014, he is a Director at the Max Planck Institute for Intelligent Systems.

Sitti and his team aim to understand the principles of design, locomotion, perception, learning, and control of small-scale mobile robots made of smart and soft materials. Intelligence of such robots mainly come from their physical design, material, adaptation, and self-organization more than to their computational intelligence. Such physical intelligence methods are essential for small-scale milli- and micro-robots especially due to their inherently limited on-board computation, actuation, powering, perception, and control capabilities. Sitti envisions his novel small-scale robotic systems to be applied in healthcare, bioengineering, manufacturing, or environmental monitoring to name a few.

Dr. Yunus Alapan is a post-doctoral scientist and Humboldt Postdoctoral Research Fellow in the Physical Intelligence Department of the Max Planck Institute for Intelligent Systems in Stuttgart. Dr. Alapan received his BSc and MSc degrees in mechanical engineering from Yildiz Technical University in Istanbul in 2011 and 2012, respectively, and his PhD degree in Mechanical Engineering from the Case Western Reserve University in 2016. Dr. Alapans research aims to develop tiny robots at the cellular scale for biomedical applications. He is also building microfluidic organ-on-a-chip platforms that can recapitulate complex disease pathophysiology and biological barriers in the body as a testing ground for micro-robots. Dr. Alapan won first place in NASA Tech Briefs Create the Future Design Contest in the Medical Category in 2014 and Student Technology Prize for Primary Healthcare organized by the Center for Integration of Medicine and Innovative Technology in 2016. His postdoctoral work is being funded by the Alexander von Humboldt Foundation since February 2017.

Oncay Yasa is a Ph.D. Student in the Physical Intelligence Department at the Max-Planck-Institute for Intelligent Systems in Stuttgart. He obtained his bachelor degree in 2012 from the Department of Molecular Biology and Genetics, Middle East Technical University (METU), Turkey. Afterwards, he studied at Bilkent University and conducted research in the field of biomimetic self-assembled macromolecules for regenerative medicine at the National Nanotechnology Research Center (UNAM). He received his master degree (M.Sc.) in 2015 from the Institute of Materials Science and Nanotechnology at Bilkent University. He has been working as a PhD student in the Physical Intelligence Department for almost three years and his research focus is on self-actuated biohybrid microsystems. Yasa wants to combine his knowledge in molecular biology and materials science to create novel biohybrid microswimmers which could be used in drug delivery applications.