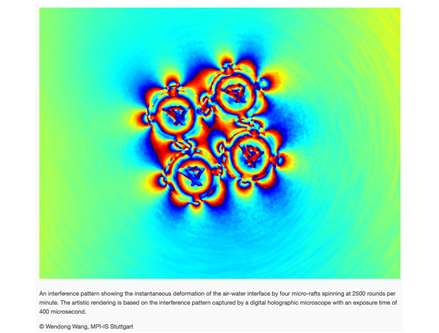 Scientists under the lead of Metin Sitti at the Max Planck Institute for Intelligent Systems in Stuttgart have recently constructed a material system that provides dynamic self-assembly.

To be alive, biologically speaking, means to be able to breath, to eat, to drink, to grow, to age, and, perhaps, to move. Food is the energy source, and metabolism translates the stored chemical energy into biochemical energy to sustain live functions. The physical abstraction of this energy transduction by living organisms is extremely simple: it involves energy input and energy dissipation. This mechanistic view of life looks almost trivial, but to apply this type of thinking in the design of materials and material systems is non-trivial. Scientists under the lead of Metin Sitti at the Max Planck Institute for Intelligent Systems in Stuttgart have recently constructed a material system that requires continuous magnetic energy input and viscous dissipation to maintain its spatiotemporal patterns, and the term usually used to describe this type of material system in the research community is dynamic self-assembly.

The other half of the researcher´s work involves programmable self-assembly. Its analogy with living organisms is more subtle but no less significant, and it involves the transfer of information or the transfer of order. The analogy goes as the following: the energy source in food are usually high molecular weight molecules such as proteins and long-chain carbonhydrates, which possess a high degree of order, whereas the chemicals in biological wastes usually have low molecular weights and hence have a low degree of order. This change from high to low order in food to waste results in an increase in order in living organism. This increase in order, or decrease in disorder, is (in technical jargon) a reduction of entropy. Entropy can be seen as a measure of ordering (disordering) as well as a measure of information. In this system, the transfer of information is from individual components to the collective ensemble, and thus the term programmable self-assembly.

“Specifically, our work is built upon the pioneering work from Whitesides’ group on spinning millimeter-sized disks at the air-water interface. The key difference between the two is the dimension of the spinning objects. Our micro-rafts are of 100 micron wide”, says Wendong Wang from the Max Planck Institute for Intelligent Systems and first author of the recent Science Advances publication. This reduction in dimension necessitates a new choice of interaction, which is the main technical innovation: the selection of a capillary interaction that enables both dynamic and programmable self-assembly in one single system. The scientists prove through experiments and simulations that parametrically defined micro-rafts undergo dynamic self-assembly through a balance of magnetic attraction and capillary repulsion, and that they form fascinating spatiotemporal patterns that can be understood through analytical modelling and geometrical analysis. Moreover, they have shown that embedded with a 4-fold rotational symmetry, these parametrically defined micro-rafts are capable of overcoming a tendency to form hexagonally packed aggregates and form assemblies that have predominantly 90 degree angels. It is therefore also programmable.

„Our goal is to fabricate and control microrobots through self-assembly approach“, says Wang. The future works have two directions. First, from fundamental science perspective, the scientists will continue to explore the parameter-space of the micro-raft design, to explore and further understand the energy and entropy transformation in their system through mathematical modelling and experiments, and will extract from these data a set of general rules that can hopefully be applied to wider areas of research such as artificial intelligence and the origin of life. Second, from technological point of view, the researchers will develop the ability to assemble micro-robots through this programmable self-assembly platform, and will combine engineering control and feedback (the so-called top-down approach) with bottom-up self-assembly approach to manipulate and control swarms of micro-robots for engineering and biomedical applications.