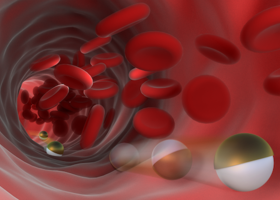 Rolling into the deep

Scientists took a leukocyte as the blueprint and developed a microrobot that has the size, shape and moving capabilities of a white blood cell. They covered the ball-shaped microroller with a magnetic nanofilm on one side and with anti-cancer drugs on the other. Simulating a blood vessel in a laboratory setting, they succeeded in magnetically navigating the microroller through this dynamic and dense environment. The drug-delivery vehicle withstood the simulated blood flow, pushing the developments in targeted drug delivery a step further: inside the body, there is no better access route to all tissues and organs than the circulatory system. A robot that could actually travel through this finely woven web would revolutionize the minimally-invasive treatment of illnesses.

Stuttgart – A team of scientists from the Max Planck Institute for Intelligent Systems (MPI-IS) in Stuttgart invented a tiny microrobot that resembles a white blood cell travelling through the circulatory system. It has the shape, the size and the moving capabilities of leukocytes and could perhaps be well on its way – in a rolling motion of course – to revolutionize the minimally invasive treatment of illnesses.

Simulating a blood vessel in a laboratory setting, the team succeeded in magnetically steering the microroller through this dynamic and dense environment. The ball-shaped drug-delivery vehicle withstood the simulated blood flow, pushing the developments in targeted drug delivery a step further: inside the body, there is no better access route to all tissues and organs than the circulatory system. It spans every cell, offering an ideal route for navigation. The research project was published in Science Robotics on 20th May with the title “Multifunctional surface microrollers for targeted drug delivery in physiological blood flow”.

The team took inspiration from white blood cells, the task force of the immune system, as they are the only motile cells in the blood stream. On their patrol to places where pathogens have invaded, they roll along the blood vessel walls, penetrating out of the blood vessel when they reach a trouble spot. The key to their motility is mainly due to substantially decreased flow velocity at the vessel walls.

Exploiting the same phenomenon, the scientists developed a microrobot they can actively propel forward and navigate inside the blood vessels in physiological high-speed blood flow conditions thanks to its magnetic properties. “Our vision was to create the next-generation vehicle for minimally invasive targeted drug delivery that can reach even deeper tissues inside the body with even more difficult access routes than what was previously possible,” says Metin Sitti, Director of the Physical Intelligence Department at the MPI-IS and last author of the publication. Conventional therapies suffer from non-specific drug distribution in the body, he elaborates further, potentially causing severe side-effects in non-targeted organs and tissues.

Each microroller has a diameter of just under 8 micrometers and is made of glass microparticles. One side is covered with a thin nickel and gold film, the other with anti-cancer drug molecules and specific biomolecules that can recognize cancer cells. “Using magnetic fields, our microrobots can navigate upstream through a simulated blood vessel, which is challenging due to the strong blood flow and dense cellular environment. None of the current microrobots can withstand this stream. Additionally, our robots can autonomously recognize cells of interest such as cancer cells. They do this thanks to a coating of cell-specific antibodies on their surface. They can then release the drug molecules while on the move,” Yunus Alapan explains. He is a postdoctoral researcher in the Physical Intelligence Department and the co-lead author of the publication.

In the laboratory setting, the microroller can reach a speed of up to 600 micrometers per second – around 76 body lengths per second, representing the fastest magnetic microrobot at this size scale. However, several challenges need to be addressed before they can perform this motion in a real-life scenario. In fact, they are far from being tested in the human body. In the lab, the team was able to image the robots using microscopes and to steer them using electromagnetic coils.

“However, resolution of the current imaging modalities in a clinic are not high enough for imaging individual microrobots inside the human body. Furthermore, therapeutic cargoes transported by a single microrobot would not be sufficient, given the size difference between a microrobot (around 10 micrometers) and the target tissues (thousands of micrometers). Therefore, the controlled manipulation of a high number of microrobots in a swarm would be necessary to generate a sufficient effect. But we are still far from that,” Ugur Bozuyuk says, who is a Ph.D. student in the same department and co-lead of the study. This was only the beginning.

The motivation for the research project goes back to Nobel laureate Richard Feynman’s famous talk “There is plenty of room at the bottom”. In his talk, the physicist envisions mechanical devices at the micron scale that can move through blood vessels and perform the surgeries from within the human body, coining the term “swallowing the surgeon”.

Over the past two decades, the research field has accelerated thanks to many leaps regarding fabrication techniques, materials used, actuation and imaging of the micro machines. However, current microrobots inside the human body have been mostly limited to superficial tissues (e.g., inside the eye), locations with relatively easier access routes (e.g., the gastrointestinal tract), and stagnant or low-velocity fluidic environments. To reach deeper locations inside the body, there is perhaps no way around the circulatory system, despite the conditions being very harsh. The scientists hope the bio-inspired strategy they have developed will help create a new venue for controlled navigation of microrobots in the circulatory system in high-speed blood flow conditions. This would potentially pave the way for targeted and localized therapeutic delivery by microrobots. 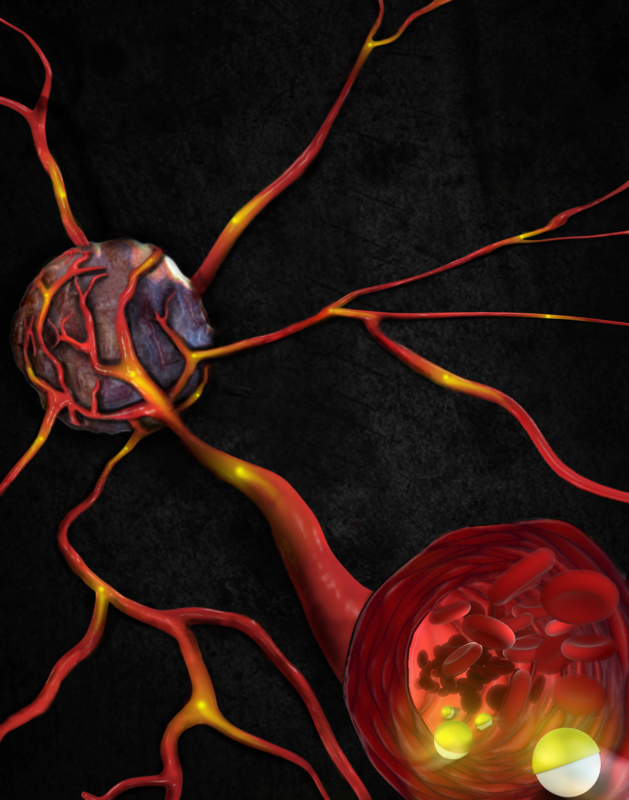