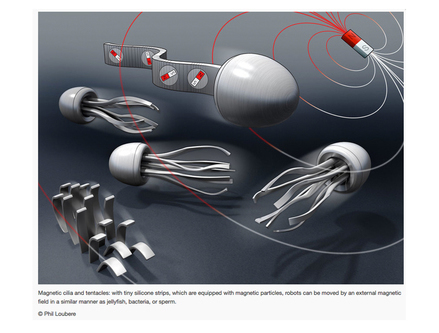 One day, microrobots may be able to swim through the human body like sperm or paramecia to carry out medical functions in specific locations. Researchers from the Max Planck Institute for Intelligent Systems in Stuttgart have developed functional elastomers, which can be activated by magnetic fields to imitate the swimming gaits of natural flagella, cilia and jellyfish. Using a specially developed computer algorithm, the researchers can now automatically generate the optimal magnetic conditions for each gait for the first time. According to the Stuttgart-based scientists, other applications for this shape-programming technology include numerous other micro-scale engineering applications, in which chemical and physical processes are implemented on a miniscule scale.

A sperm is equipped with a flagellum (tail-like extension), which can beat constantly back and forth to propel the sperm towards an egg. Researchers from the Max Planck Institute for Intelligent Systems in Stuttgart have now enabled an extremely thin strip of silicone rubber, which is just a few millimetres in length, to achieve a very similar swimming pattern. To do this, they embedded magnetizable neodymium-iron-boron particles into an elastic silicone rubber and subsequently magnetized this elastomer in a controlled way. Once the elastomer is placed under a specified magnetic field, the scientists were then able to control the elastomer’s shape, making it beat back and forth in a wave-like fashion.

The scientists also succeeded in imitating the complex rowing movement of a cilium in a very similar way. Cilia are extremely fine hairs found on the surface of paramecia – they propel the organisms forward by using highly complex rowing strokes. The researchers also constructed an artificial jellyfish that has two soft tentacles, which have been programmed to carry out rowing-like swimming movements.

The crucial factor behind all of these movement processes is that different areas of the elastomer can react differently to an external magnetic field: some zones have to be attracted and others repelled. Otherwise, the elastomer would not be able to reshape into a wave or begin to roll up at its ends.

In order to enable different magnetic response along the elastomer, the researchers leveraged two key ideas: “Firstly, we varied the density of the magnetizable particles along the elastomer and secondly we also controlled the magnetization orientation of these particles,” explains Guo Zhan Lum, a scientist in the Department of Physical Intelligence at the Max Planck Institute in Stuttgart. The scientists controlled the local concentration of the particles during the fabrication process so that after the rubber has been exposed to a strong magnetic field, different parts of the rubber will possess different magnetic strength.

“One of the keys to the success of our work is that we succeeded in calculating the optimal magnetization profile and magnetic field for a desired movement pattern,” says Metin Sitti, Director of the Max Planck Institute for Intelligent Systems. To this end, he and his colleagues from the Institute’s Department of Physical Intelligence used a mathematical model to describe the physics of shape-programmable magnetic microrobots, and this model was also utilized to develop a corresponding computer algorithm – the very first of its kind. Scientists were previously reliant on intuition and could only estimate the required magnetic conditions.

According to the Stuttgart-based scientists, the ability to program soft materials like silicone rubber into functional devices could be of interest for a range of applications. For example, Metin Sitti can imagine that the above-described swimming movements will be used in medical applications one day. It may be possible to guide mini-taxis via magnetic field so that they can transport drugs or medical devices to desired locations in the body.

This is not the only possible application the researchers can envisage in the area of microrobot locomotion. The fact that the shape of materials can be regulated and controlled via magnetic fields in mere fractions of a second could be of use in all applications that require the activation or mechanical steering of such devices in a small space. The technology could therefore also be used in micro-scale engineering applications, for instance to control the micro pumps required for lab-on-a-chip technologies. “We hope that the shape-programmable soft materials will inspire researchers working in many fields to make use of this technology in a wide range of applications,” says Metin Sitti.