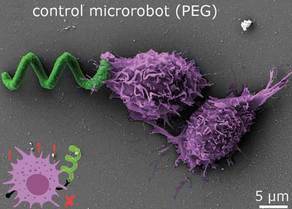 Stealth microrobots fly under the radar of the immune system

This causes a big problem in many areas of nanomedical drug delivery when the drug delivery vessels get recognized by the immune system as potential threats and foreign objects – and consequently are eliminated by immune cells – before they can deliver their drug cargo at the intended destination. Of course, the development of micro- and nanoscale untethered robots used for medical purposes such as non-invasive surgery and drug delivery is afflicted by undesired interaction with the immune system as well. In particular, the activation of macrophages, a type of immune cells that are on the lookout for pathogens, is a major obstacle for developing functional medical microrobots that can operate in vivo for a prolonged period of time. Researchers are trying to overcome this challenge by 'camouflaging' therapeutic nanoparticles with special coatings so that they avoid detection by macrophages. In new work coming out of the Physical Intelligence Department at the Max Planck Institute for Intelligent Systems in Germany, researchers report the development of stealth microrobots that can fly under the radar of the immune system, and hence prolong their window of operation since they do not get eliminated. The interdisciplinary team, which included researchers from Universitat Ramon Llull in Barcelona and the Robotics Institute at the University of Michigan, reported their findings in Advanced Materials ( "Zwitterionic 3D-Printed Non-Immunogenic Stealth Microrobots"). "Our results provide a new set of materials for the design and fabrication of hydrogel microrobots with stealth properties, which will bring microrobots closer to clinics," Prof. Metin Sitti, Founder and Director of the Physical Intelligence Department, tells Nanowerk. "Future work will include the validation of the stealthy properties of these microrobots in vivo and then apply them for clinically-relevant scenarios." The team's stealth microrobots are fabricated from a zwitterionic non-immunogenic material that avoids detection and phagocytosis from macrophages. Tests showed that they can remain undetected by macrophages after long and exhaustive inspection (>90 hours), which has not been previously achieved in any microrobot system.

Zwitterionic polymers – a family of materials that have the same number of cations and anions along their polymer chains – have been previously demonstrated in nanoparticle systems for drug delivery and coatings. However, this is the first time that this type of emerging polymers are used in the microrobotics field. "We have developed zwitterionic photoresists for 3D-printing of hydrogel microrobots using two-photon polymerization for the first time," Sitti points out. "Our zwitterionic inks can be easily functionalized not only in post-printing processes but also in a single printing step: tunable mechanical properties, incorporation of magnetic nanoparticles, encapsulation of biomolecules, and surface functionalization." 3D microprinting via two-photon polymerization (2PP) is an emerging nanofabrication technique that enables complex polymeric 3D structures with down to 100 nm resolution. 2PP involves using a tightly focused infrared femtosecond laser to expose an UV-curable photoresist material – i.e. specially formulated printing inks – which causes two-photon adsorption that, in turn, triggers a polymerization reaction. During printing, a laser beam is moved in all spatial directions through the initially liquid photoresist. The photoresist hardens in the focal point of the laser beam only. In this way, freely designed complex micro- and nanostructures can be written exactly at the place of their purpose – even nanoscale objects such as AFM tips on cantilevers. 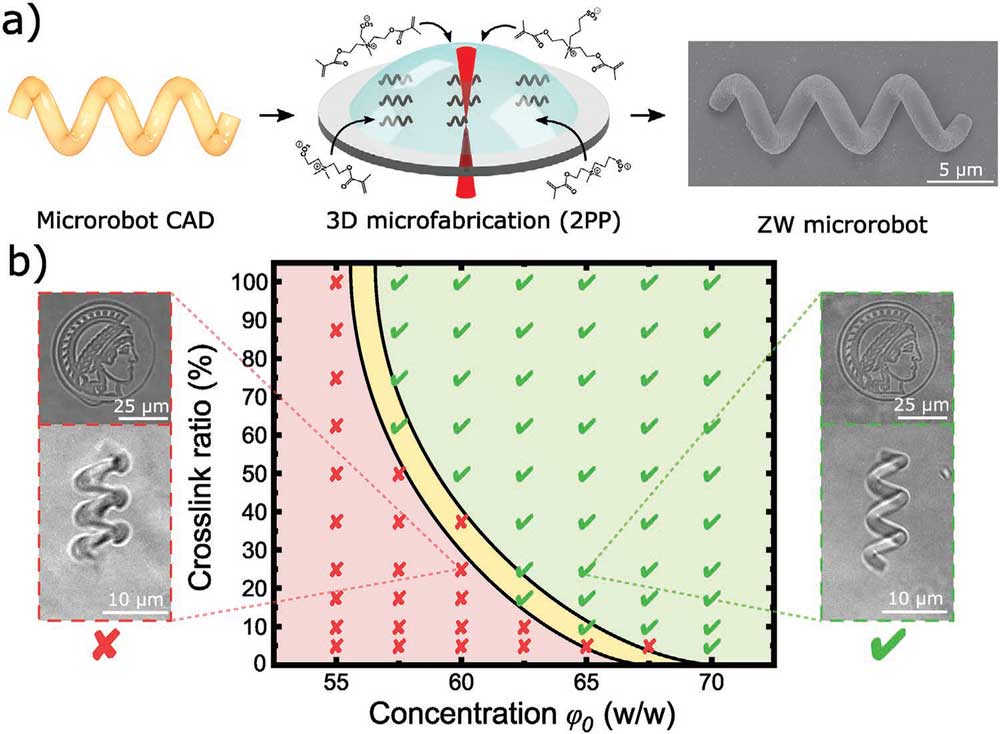 SEM image of macrophage interacting with a non-stealth control robot (left) and with a zwitterionic stealth microrobot (right) at the early stages of inspection. (Reprinted with permission by Wiley-VCH Verlag) (click on image to enlarge)