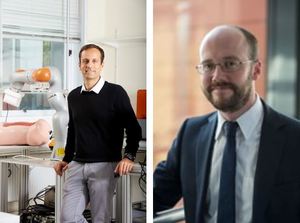 Prof. Pietro Valdastri's talk will focus on Medical Capsule Robots. Capsule robots are cm-size devices that leverage extreme miniaturization to access and operate in environments that are out of reach for larger robots. In medicine, capsule robots can be designed to be swallowed like a pill and to diagnose and treat mortal diseases, such as cancer. The talk will move from capsule robots for the inspection of the digestive tract toward a new generation of surgical robots and devices, having a relevant reduction in size, invasiveness, and cost as the main drivers for innovation. During the talk, we will discuss the recent enabling technologies that are being developed at the University of Leeds to transform medical robotics. These technologies include magnetic manipulation of capsule robots, hydraulic and pneumatic actuation, real-time tracking of capsule position and orientation, ultra-low-cost design, frugal innovation, and autonomy in robotic endoscopy. Prof. Russell Harris has been researching new manufacturing processes for over 20 years. He has several research projects focussing on robotics, and is particularly interested in how new manufacturing processes can be an enabler to advanced robotic devices and components. In this talk he will discuss some of this research and where he believes there may be new opportunities for collaborative research across manufacturing and robotics.

Biography: Prof. Pietro Valdastri’s academic career started with a Laurea degree cum Laude in Electronic Engineering from the University of Pisa in 2001 and a PhD degree cum Laude in Biomedical Engineering from Scuola Superiore Sant’Anna in 2006, with Prof. Paolo Dario as primary advisor. After the PhD, he served as Assistant Professor of Biomedical Engineering at the BioRobotics Institute of Scuola Superiore Sant’Anna for three years, focusing on implantable medical devices and surgical robotics. In 2011, Prof. Valdastri moved to Vanderbilt University, where he became Assistant Professor of Mechanical Engineering. There, Prof. Valdastri started the Science and Technologies Of Robotics in Medicine (STORM) Lab focusing on medical capsule robots for gastrointestinal endoscopy and abdominal surgery. In 2016, he moved to Leeds as Full Professor and Chair in Robotics and Autonomous Systems with a primary appointment in the School of Electronic and Electrical Engineering and a secondary appointment in the School of Mechanical Engineering. In Leeds, Prof. Valdastri is directing the STORM Lab, the Institute of Robotics, Autonomous System and Sensing (IRASS), and the Robotics at Leeds network. Prof. Valdastri is a Royal Society Wolfson Research Fellow, a Senior Member of the Institute of Electrical and Electronics Engineers (IEEE), the Editor for Medical and Rehabilitation Robotics of the IEEE Robotics and Automation Letters, a member of the Technology Committee of the European Association for Endoscopic Surgery (EAES), and a member of the steering committee of the International Society for Medical Innovation and Technology (iSMIT). In the last five years, Prof. Valdastri received more than €10M in research funding as Principal Investigator, including the National Science Foundation CAREER Award with the proposal “Lifesaving Capsule Robots” in 2015 and the European Research Council Consolidator Grant Award with the proposal “NoLiMiTs – Novel Lifesaving Magnetic Tentacles” in 2019. STORM Lab’s research has been featured by several tech news outlets, including BBC, The Financial Times, The Spectator, WIRED, IEEE Spectrum, Medgadget, Daily Mail, The Engineer, Medical Design Technology Magazine, Medical Xpress, Newswise, NSF Science Now. Prof. Russell Harris has specialised in the field of advanced manufacturing research since 1997. His research portfolio has particularly focused on high-value manufacturing across a range of applications, and is characterised by its collaborative interdisciplinary nature and industrial links. He was first granted a personal Professorial chair in 2012 at Loughborough University, and since 2016 is the head of the Future Manufacturing Processes Research Group at the University of Leeds. His research work has been predominantly funded by the EPSRC and the EU, alongside industry funding. He has presented and published over 100 research papers, including such prestigious publications as Proceedings of the Royal Society, The Lancet, Procedia CIRP, and the American Society of Mechanical Engineers. The value and impact of his manufacturing research has been recognised in the award of the 2013 Queen’s Anniversary Prize for High-Value Manufacturing.