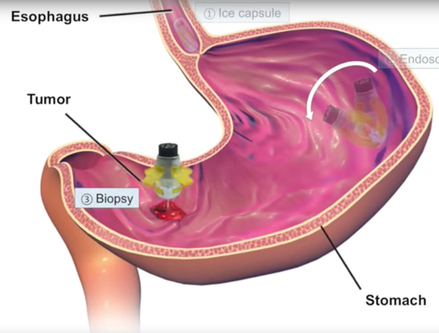 This capsule robot innocuously tumbles around inside your stomach—until it reaches suspicious-looking tissue. Then, like an EpiPen on steroids, the soft-bodied bot whips out a needle and jabs that spot inside your stomach in ten fast pumping movements. But this swallowable needle doesn’t inject anything. Instead, it suctions up samples of tissue that doctors can analyze for signs of cancer or other disease. Then it moves on to other suspicious spots inside the stomach—jab, jab jab!

The biopsy technique, called fine needle aspiration, is typically performed from outside the body. This capsule robot, designed by researchers at the physical intelligence department at Max Planck Institute for Intelligent Systems, in Stuttgart, Germany, moves the technique inside the body. Thanks guys.

Previous swallowable biopsy robot designs only scrape at the surface tissue, they argued at ICRA. Doctors need a tool that will really get in there, and this design will do it. They tested it out on fresh pork fat placed in a plastic human stomach model. The capsule is equipped with a magnet, allowing the researchers to guide the robot’s orientation and jabbing motions while inside the stomach. Of course after the job is done, the robot, with tissue sample inside, has to be retrieved. Its inventors suggest pulling it back out of the throat by a tether. Thanks again, guys!