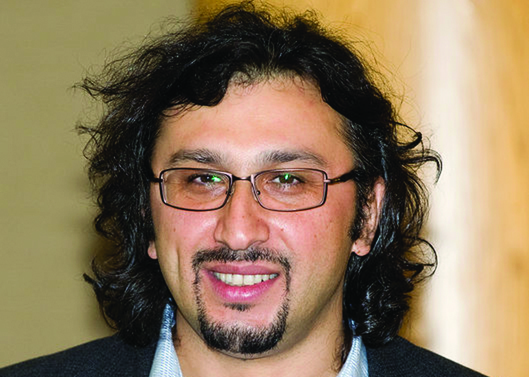 The Max Planck Institute for Intelligent Systems has appointed Metin Sitti as a new director at the institute’s Stuttgart location. There, Sitti will head the Physical Intelligence Department. One of the main goals of his research will be to obtain a new understanding of physically intelligent systems made of smart and soft materials.

More precisely, he would like to understand design principles for small-scale robots in order for them to be able to function and act intelligently. One important aspect here is the question of how small robots can be made to perceive and learn with limited on-board computational capabilities, in other words, without the aid of a full capacity on-board computer that can sense and analyze the robot’s surroundings and decide an appropriate response. To answer this question, Sitti wants to understand the principles of designing and controlling miniature robots that have the ability to perceive, act and learn autonomously in response to a complex environment based on their physical design, processing, adaptation, reconfiguration, self-organization, and control. “This means that the skills of such tiny robots in the areas perception, learning and control are not entirely controlled by a computer. Computation should play only a subordinate or complementary role”, explains Metin Sitti. “A micro-scale robot that is designed to transport medical drugs to a specific place inside the human body, for example, cannot be equipped with a navigation system or an additional engine due to lack of space and power. But if said robot utilizes smart materials and physically intelligent construction to receive and process signals from its surrounding and extract propulsion energy from it, then its properties provide it with the intelligence and autonomy to carry out the task it was designed for.” Another research challenge Sitti would like to solve is the control over large numbers of small-scale robots. His aim here will be to understand how such a swarm can enhance the capabilities and functions of its members, i.e. computationally and physically limited small robots, by using collective and distributed behavior, self-organization, and reconfiguration.

In addition to basic research, Sitti wants to convert basic research knowledge stemming from his small-scale physically intelligent systems into practical high-impact applications in medicine and biology. “With the use of small robots inside the human body, we could revolutionize the diagnosis and treatment of many diseases in difficult to reach, small regions of our body non-invasively”, says Sitti. With this approach, he takes his research to a new level. Up until now, his main focus wason the locomotion of miniature robots, bio-inspired micro- and nanomaterials, and micro- and nano-manipulation systems. Sitti’s research complements that of the Max-Planck-Institute for Intelligent Systems and creates an additional bridge between the institute’s Stuttgart-based research on intelligent materials and bio-, micro- and nano-systems and the research on perception, computer sciences, and robotics, the main focus at the departments in Tübingen. Sitti is thrilled about his move to Germany: “The Max-Planck-Institute for Intelligent Systems has the potential to become one of the world leading research institutions in the intelligent systems field by solving some of the greatest research challenges using novel computational, physical, bio-inspired, and bio-integrated approaches at different length scales.” He hopes to diversify and enhance his research activities by forming new collaborations with the existing research groups and the available cutting-edge research infrastructure at the institute. He is looking forward to getting many new impulses for unexplored and fascinating research directions.

For Michael Black, Managing Director at the Max-Planck-Institute for Intelligent Systems, the appointment of Metin Sitti is a great step towards strengthening the institute’s research profile: “Metin Sitti will immediately establish the MPI for Intelligent Systems as a leading institution for a new kind of interdisciplinary and multi-scale robotics research that asks fundamental questions about perception, action and learning. By moving to Germany he will strengthen EU as a leader in the emerging field of micro robotics and its applications to human health.”

Metin Sitti received his B.Sc. and M.Sc. degrees in electrical and electronics engineering from Bogazici University in Istanbul, Turkey, in 1992 and 1994 as well as his Ph.D. in electrical engineering from the University of Tokyo, Japan, in 1999. He went on to become a research scientist and later lecturer between 1999 and 2002 at the University of California at Berkeley, USA. In 2002, he became a professor at the Department of Mechanical Engineering and Robotics Institute at Carnegie Mellon University in Pittsburgh, USA. He was also director of NanoRobotics Lab and Center for Bio-Robotics there. In June 2014, he became director of the Physical Intelligence Department at the Max-Planck-Institute for Intelligent Systems, Stuttgart location. With his appointment, the number of departments at the MPI-IS increases to eight.